I graduated in Biology (Physiology of Organisms) at the University of York in 1981, and went on to do my PhD with Prof. Roger Woledge in the Physiology Department at University College London, on the energetics of muscle contraction. I was awarded my PhD in 1984, worked briefly with Roger for a couple of months, before moving to the Biophysics Department at Kings College London, where I worked with Professor Malcolm Irving to demonstrate that birefringence could be used as a reporter of myosin cross bridge orientation in skeletal muscle (1985-7). I then worked at UCSF (San Francisco)(1987-8) before returning to the Biology Department at the University of York, to work with Professors David White and John Sparrow on insect flight muscle kinetics (1988-1990). As part of that work, we used the flight muscle of Drosophila Melanogaster as a model system. Mutations in contractile proteins were engineered into flight muscle actin, and I used sophisticated biophysical measurements to determine effects on contraction, resulting in a paper in Nature (1990). I was awarded a Royal Society University Research Fellowship to move to the Biophysics Department, KCL in 1990, where I started my own lab, and began to use molecular biology and cell culture techniques to investigate the cytoskeleton in cultured muscle cells. I moved to the University of Leeds in 1997, becoming a Lecturer, Senior Lecturer, Reader then Professor in 2010. I developed a strong interest in imaging and confocal microscopy alongside my interests in the cytoskeleton, developing super-resolution approaches at Leeds about 5-10 years ago, including the development of Affimers for STORM. My interests have also expanded out to more structural biology approaches, including the discovery and characterisation of single alpha helices (SAH) domains in proteins and most recently my laboratory solved the structure of the shutdown state of myosin using Cryo-EM. I have trained over 40 postgraduate and postdoctoral researchers. I was the president of the Royal Microscopical Society (RMS) from 2016-2019 and am currently the Executive Honorary Secretary of the RMS.

Our laboratory has broad interests in the cytoskeleton, from basic research into how myosins perform their functions in cells, to how mutations in cytoskeletal proteins cause disease. We use a range of approaches to uncover how myosins work, from solving the structure by Cryo-EM to imaging myosin and the cytoskeleton within cells using confocal, super-resolution and electron microscopy, and a range of biochemical and biophysical approaches.

We recently solved the structure of the shutdown state of smooth muscle myosin (Scarff et al. December 2020, Nature) as shown above, using CryoEM.  This reveals for the first time how myosin adopts the shutdown state, and how phosphorylation of the regulatory light chain activates the molecule.

We have a very strong interest in imaging, including super-resolution imaging. We have built a 3D PALM/STORM system, that allows a resolution of ~10nm (about 20 times better than a normal wide-field microscope), and an iSIM (instant structured illumination microscope) which is very good for fast live cell imaging. The image below shows a 3D STORM image of the actin cytoskeleton in a cell.

We recently developed software to tease out patterns of organisation for proteins within cells (Curd et al., Nanoletters, 2020) as shown above.

We work on the roles of myosins in diseases such as cancer (Makowska et al., Cell Reports, 2015), where we find that specific myosins are overexpressed and contribute to the phenotype of prostate cancer.

We are also interested in how muscle cells differentiate in culture - and how they can organise the cytoskeleton into beautifully regular structures, as show here for a cultured human skeletal myotube, stained for skeletal myosin (green), and use this as a model system to investigate the effects of mutations in muscle myosins (Parker et al., Journal of Molecular Biology, 2018) 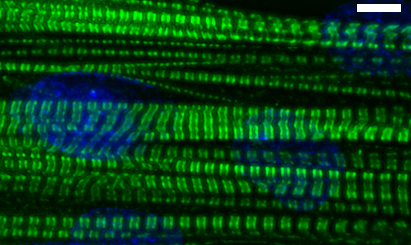 We are collaborating with Darren Tomlinson's group to raise small non-antibody binding proteins (~12kDa in size) called Affimers to cytoskeletal proteins, to improve our super-resolution imaging, and have also a range of Affimers to different proteins including tubulin (recently published in E-life: Tiede et al., 2017; Lopata et al., Sci. Reports 2018).

We are funded by BBSRC to use super-resolution microscopopy (PALM/STORM) to uncover the organisation of proteins in the striated muscle Z-disc, exploiting the use of Affimers, and in a second grant, to investigate protein organisation in primary cilia (with Colin Johnson, FMH). MRC is funding us to investigate mutations in non-muscle myosin 2A and the underlying reason for these mutations to result in blood disorders, and to investigate mutations in skeletal and cardiac myosin, to understand how these result in heart and skeletal muscle diseases (the latter with Julien Ochala, in Copenhagen).

PhD students in the lab are also studying aspects of these problems, including cryo-EM and modelling of myosin 5 (Wellcome Trust funded, with Ste Muench and Sarah Harris (MAPS)), using super-resolution microscopy, crystallography and electron microscopy to study  ASPM, a protein involved in mitosis (With Jacqueline Bond in the faculty of Medicine and Health), and investigating muscle satellite cells (with Stuart Eggington in FBS).