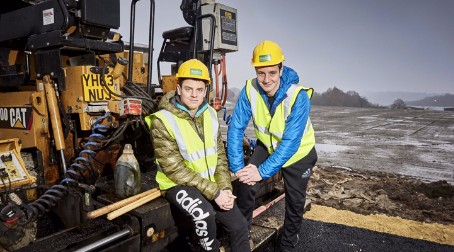 A new £5m University of Leeds sports facility is to be named after its most successful alumni athletes, Olympic heroes Alistair and Jonny Brownlee.

The Brownlee Centre sits alongside a new 1 mile (1.6km) cycle circuit – one of the longest in the country – at the University’s Bodington playing fields in north Leeds.

The unique centre, which opens in April 2017, is the UK’s first purpose-built triathlon training base and will provide the first permanent home for the world-class Leeds Triathlon Centre.

Combining a strength and conditioning training suite, physiotherapy, medical and other support services, this new development will enhance facilities for both cycling and triathlon in the region.

Partnership funding from Sport England, UK Sport, British Cycling and British Triathlon is contributing £1million to the project, with the remaining funding provided by the University.

“This is a real honour,” said Alistair Brownlee. “Having the UK’s first purpose-built triathlon centre in Leeds will ensure that the city continues to be a hub for triathlon.

It brings together the facilities top athletes need in one place to create a world class training environment.

Alistair studied sports science and physiology right here in FBS and won gold in the triathlon competition at the Rio 2016 Olympic Games.

His brother Jonny, a Leeds history graduate who took silver in August, added: “We can’t wait to bring our bikes up here and try it. The track is a great addition to Yorkshire’s cycling facilities and will benefit cyclists and other sportsmen and women of all abilities.

“We’re both really pleased to continue our relationship with the University and I hope that what we’ve achieved can inspire everyone who uses the facilities to try their hardest, whether it’s in competitive sport or in building confidence on two wheels.”

Vice-Chancellor Sir Alan Langlands said: “The University is extremely proud of Alistair and Jonny’s achievements and it is fitting that this unique world-class facility, which will inspire thousands of people to be more active, is to be named after two of our most successful sportsmen.

“Our graduates have dominated top level triathlon and cycling at various events, an achievement which everyone in Leeds can be proud of.

"Opening The Brownlee Centre and new cycle circuit reinforces our vision of becoming the number one provider of higher education sport and physical activity experience in the UK.”

The University is one of the UK’s leading sports institutions, with the Brownlees following in the footsteps of a number of Olympic champions.

Suzanne Glavin, Head of Sport and Physical Activity at the University, said: “We’re really pleased to acknowledge the fantastic sporting success of the Brownlees in such a practical, permanent way.

“We are so proud of Alistair and Jonny and of their continuing relationship with the University – from regular training at our facilities, to the inspiration they provide students, staff and members of the public alike with their achievements.

“We are also pleased to have played a part in their success by providing excellent training facilities and by tailoring their degrees to allow time to prepare and compete.

“The facility they are putting their name to represents a success story for cycling and triathlon in Leeds and beyond. It will ensure athletes of all abilities have some of the best facilities in the UK available close to home.”

The 6 metre-wide cycle circuit will provide a traffic-free environment for cyclists of all ages and abilities – including University students, staff and the wider community – for recreation, coaching and competition.

Jonny Clay, British Cycling’s Director of Cycling, said: “Leeds – and the wider West Yorkshire region – has produced countless successful elite sportspeople over the years, and one of British Cycling’s key aims has always been to ensure that elite success translates into mass participation, and that those inspired by Britain’s finest cyclists have high quality facilities at which to develop their own skills and confidence on a bike.

“This new cycle circuit will deliver exactly that for the people of Leeds, and we look forward to seeing locals, regardless of age, ability or previous level of experience on a bike, take advantage of the facility once it is open.”

Four of the six Team GB Rio games triathlon competitors – including the Brownlees’ fellow University of Leeds alumnus Gordon Benson – will be based at the new facilities.

The site will also continue to be used for grass sports including football and rugby. The next phase of development will see three additional grass pitches, with work scheduled for completion in September 2017.

The University has invested over £25m in new sports facilities over the past 10 years and these improvements complement nearby Sports Park Weetwood, the University’s flagship 100-acre facility used by students and members of the community for hockey, football, rugby, cricket, lacrosse, American football and more.

For further information, contact University of Leeds Media Relations on 0113 3434031 or email pressoffice@leeds.ac.uk.