Scientists a step closer to drug treatment for Hepatitis B 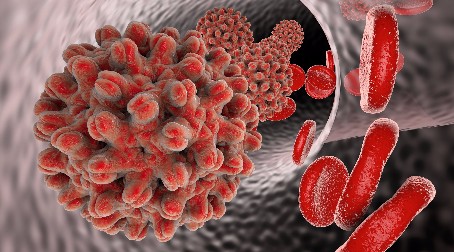 A major new insight into how Hepatitis B Virus works could pave the way for new drug treatments for the infection which is the major cause of liver cancer worldwide.

The team at the Universities of Leeds and York identified an 'assembly code' in the genetic material of Hepatitis B Virus that allows it to create a protective casing in which it can produce new infectious virus particles.

They found that the signal, generated by ribonucleic acid (RNA), helps viral proteins to overcome an ‘engineering problem’, assembling them into in a particular geometric pattern. Professor Reidun Twarock, mathematical biologist at the University of York, introduces the research:

“It is a bit like the chain on a bicycle. If we don’t assemble the chain on the sprockets, it becomes tangled and won’t function. Once assembled correctly, it connects the pedals with the wheels allowing the component parts to work together.”

“We see the same process happening between the Hepatitis B RNA signals and the viral proteins. The proteins are attracted by these signals, which then promote their assembly into a precise molecular machine that allows the virus to produce a DNA copy of its genetic material and hence become infectious.”

The virus is transmitted through blood and bodily fluids. It is thought that more than two billion people have been infected worldwide, and around 350 million people remain carriers of the infection, which can, over time, result in their deaths.

The virus occurs in Europe but is much more common in parts of Asia, especially China and Africa. There are more than one million infected people in the USA where treatments can include expensive drugs and even liver transplantation.

“There is a vaccine for the virus, but once you have the condition there is no treatment, other than drugs that can reduce symptoms but not change the long-term outlook.

"We often compare the disease to HIV due to the way in which the virus is passed from person to person, but unlike HIV there are no effective drugs to improve quality of life outcomes.

"Now that we know how the virus assembles, we can interrupt the interactions with the RNA signals – a bit like when a twig catches the sprocket on a bike, knocking the chain off."

The researchers are already collaborating with a team at the National Institutes of Health in the USA to identify potential drug candidates that are capable of breaking the link between RNA and proteins which should halt viral replication.

The research was funded by The Wellcome Trust, the Medical Research Council, and the Universities of Leeds and York, and is published in the journal Nature Microbiology.

Journalists with questions or interview requests should contact Peter Le Riche in the University of Leeds press office on 0113 343 2049 or p.leriche@leeds.ac.uk.