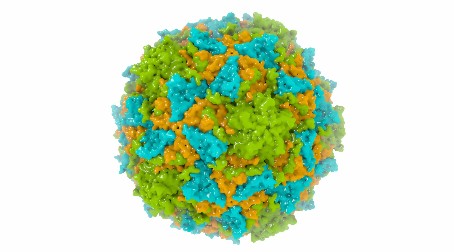 Prof Dave Rowlands, Emeritus Professor of Virology at the University of Leeds and Principal Investigator on this project, has led a team of scientists to produce a new polio vaccine with the help of plants.

The results of this research – conducted by a collaborative team from the University of Leeds, John Innes Centre, Oxford University, Diamond Light Source, the Henry Wellcome Building for Genomic Medicine and The National Institutefor Biological Standards and Control – was published in the journal Nature Communications, Plant-made Polio 3 stabilised VLPs — a candidate synthetic Polio vaccine.

The vaccine has been produced with a method using virus-like particles (VLPs) that have been grown in genetically modified plants. These VLPs mimic the polio pathogen and trick the immune system into protecting itself.

Genes carrying information to produce the VLPs are infiltrated into the plant tissues and the plant then reproduces the VLPs in large quantities. This means that the system of growing non-pathogenic virus mimics in plants can be scaled up.

The method uses the same technology that helped design a new synthetic vaccine to combat foot and mouth disease.

It is hoped that the vaccine will help globally eliminate the disease which has been present since prehistory; its effects having been depicted in Egyptian paintings thought to be from between 1403-1365 BC.

The vaccine has proved to be a success in animal tests, during which the viral particle vaccine tricked the immune system into defending against polio. There is hope that the vaccine will produce the same effects in humans, without the risks current “live” vaccines have.

Prof Rowlands said, “Small scale laboratory tests demonstrated that the ground-breaking synthetic vaccine provided animals with immunity from the disease similar to the existing widely used vaccine. Although this is still early results, it does provide evidence that this can be taken to the next stage with input of pharmaceutical industry collaborators.

“The results of our research pave the way towards production of a novel synthetic vaccine to help bring about the global elimination of poliomyelitis. Such a vaccine would be quicker, easier and safer to produce, without the inherent danger of accidental release of virus associated with the production of current vaccines.”

The research has been funded by the World Health Organisation and the Bill & Melinda Gates Foundation.

The full research paper can be read on Nature Communications