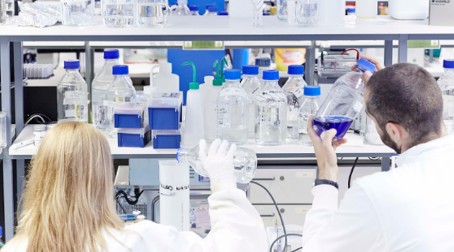 This research was led by Dr Andrew Macdonald at The Astbury Centre for Structural Molecular Biology.

New drugs in the early stages of development by pharmaceutical companies could have an extra benefit – the ability to cancel out HPV virus, which can cause cervical cancer and skin conditions.

Scientists at the University of Leeds and University of Birmingham, whose research focuses on Human Papilloma Virus (HPV), say many people are unaware it is also responsible for numerous other cancers, especially those affecting the head and neck, which are increasing and becoming more prevalent in men.

They have now discovered the role of one of the crucial proteins responsible for allowing HPV to infect cells. It is called STAT3 and is essential for HPV to replicate.

The team, led by Dr Andrew Macdonald at the University's Astbury Centre for Structural Molecular Biology, said without STAT3 the virus could not work because the full set of properties it needed would not be available.

His team, funded by Wellcome and the Medical Research Council, has also found the individual enzymes which activates STAT3 in cells infected with HPV.

Uncovering the identity and role of these enzymes which ‘switch on’ STAT3 completes the chain and means scientists have a new pathway to work through to target HPV-based cancers.

Dr Macdonald said the fact drugs were already being developed which targeted the same enzymes for other uses meant the possibility of a new treatment could be much closer to becoming a reality.

He said: “We need to find new ways of treating HPV cancers, so we have been working towards understanding how the virus works and interacts with cells.

“Now we have identified both the role of STAT3 and how it is activated, we have a potential target for future studies in combating HPV associated disease.

“We know there are various drugs being developed that have the potential to target the enzymes we are dealing with for other purposes. This is great news because it means that while there is still a long way to go, we are already over the first hurdle.”

The team used samples of donated human skin cells to understand how the virus increased cell growth, and found that when STAT3 was not active, this was prevented.

PhD researcher Ethan Morgan, who carried out much of the lab work to identify the roles of STAT3 and the enzymes that switch it on, added: “The process of uncovering these enzymes and the way they activate STAT3 has been really important because we have now found an approach which could prevent HPV infection. The next step for us will be more time in the lab refining our work and then confirming the role of STAT3 in HPV associated cancers.”

Currently there is no screening programme for head and neck cancers and, while there is a HPV vaccine, it is only effective if administered before infection with the virus.

The research has been published in the journal PLoS Pathogens

Journalists with questions or interview requests should contact Peter Le Riche in the University of Leeds press office on +44(0)113 343 2049 or email p.leriche@leeds.ac.uk