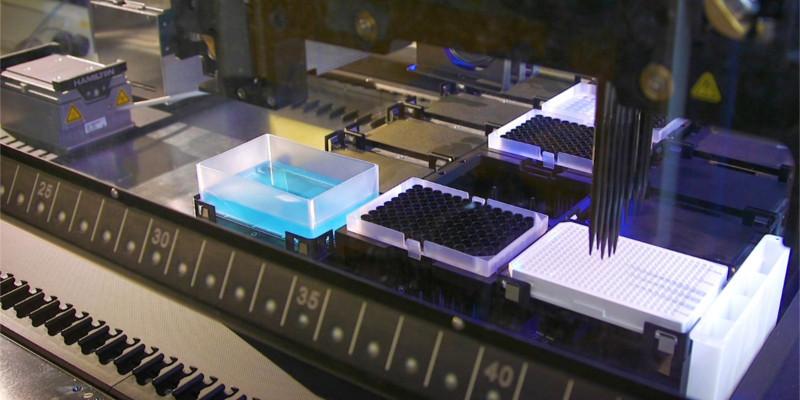 A £103 million revolution to develop new technologies which will drive forward biology and medicine research and development has been officially launched today.

The Rosalind Franklin Institute is a new national body, dedicated to bringing about transformative changes in life science through interdisciplinary research and technology development.

The University of Leeds is one of 11 partners of the Institute, which will bring together researchers in life sciences, physical sciences, and engineering – mirroring the University’s own highly interdisciplinary institutional approach to research, demonstrated in areas such as the Astbury Centre for Structural Molecular Biology.

Funded by the UK government, the Rosalind Franklin Institute will be home to 150 researchers from academia and industry, working with colleagues at all of the partner universities.

They will harness artificial intelligence, robotics and other systems to improve scientists’ understanding of biology, leading to new diagnostics, new drugs, and new treatments for millions of patients.

At the heart of the Institute will be new instruments to allow the direct observation of the interactions between drug candidates and target proteins.

Professor Lisa Roberts, Leeds’ Deputy Vice-Chancellor: Research and Innovation, said: “Cutting-edge research is increasingly dependent on collaboration and partnerships; our strategy at Leeds focusses on supporting interdisciplinarity and making a step-change in the way we work with industry. Our partnership with the Rosalind Franklin Institute is a prime example of our overall approach to modern research practices.

“Our academics have expertise which will play a vital role in developing technologies and approaches that can be applied to different stages of the drug discovery process.

“Being a part of the Rosalind Franklin Institute builds on Leeds’ strengths in making a real and telling difference to the world around us, by working across traditional boundaries to find innovative solutions to some of the greatest challenges facing us today.”

Professor Adam Nelson, from Leeds’ Astbury Centre for Structural Molecular Biology and School of Chemistry, is spearheading a unique project at the Oxfordshire-based Institute, which will pioneer fully-automated facilities to streamline future drug discovery.

He leads the ‘Next Generation Chemistry for Medicine’ theme, which is one of the institute’s five core research themes.

Professor Andrew Livingston, Interim Academic Lead at the Rosalind Franklin Institute, said: “The Next-Generation Chemistry theme is working with industrial and academic partners from around the UK, and under Adam’s leadership will deliver internationally-significant and unique technologies in the coming years.”

At present, new drugs are discovered through a slow and extremely expensive process. It relies on optimising candidate molecules to allow the discovery of a drug that can treat an underlying disease such as cancer or Alzheimer’s. It costs around $2 billion to bring each new drug to the market when the costs of failed drug discovery projects are taken into account.

Professor Nelson said: “This won’t be a traditional chemistry lab. It will use robotics and artificial intelligence to automate the discovery process. It will allow hundreds or thousands of candidate molecules to be investigated at a time, and we aim to increase productivity by five to 10 times.

“But faster processing isn’t enough. We also want to find higher-quality starting points for drug discovery to maximise the chances of success at later stages in the pipeline. This will enable the UK to remain globally competitive in bringing new drugs to the market that can meet the needs of patients.”

The namesake of the Institute, the pioneering X-ray crystallographer Rosalind Franklin, was one of the key figures in the discovery of the structure of DNA, and used a technique with roots in physics and technology to transform life science.

Franklin’s research followed in the footsteps of researcher Dr Florence Bell, who took the first photographs of diffraction patterns from DNA fibres whilst working in the lab headed by Professor Bill Astbury at the University of Leeds.

The University’s Astbury Centre for Structural Molecular Biology has greatly expanded on this work, bringing together techniques such as cryo-electron microscopy, X-ray crystallography and nuclear magnetic resonance, to study life in molecular detail. Professor Sheena Radford, Director of the Centre, is also involved in the Rosalind Franklin Institute’s structural biology research theme.

The Rosalind Franklin Institute is an independent organisation, formed through a joint venture between UK Research and Innovation, which encompasses the country’s research councils and the Science and Technology Funding Council, and the 10 university partners:

For more information, visit the Rosalind Franklin Institute at www.rfi.ac.uk.

Journalists with requests for interviews, images, films or further details should contact Peter Le Riche in the University of Leeds press office on +44(0)113 343 2049.