Fungi could reduce reliance on fertilisers 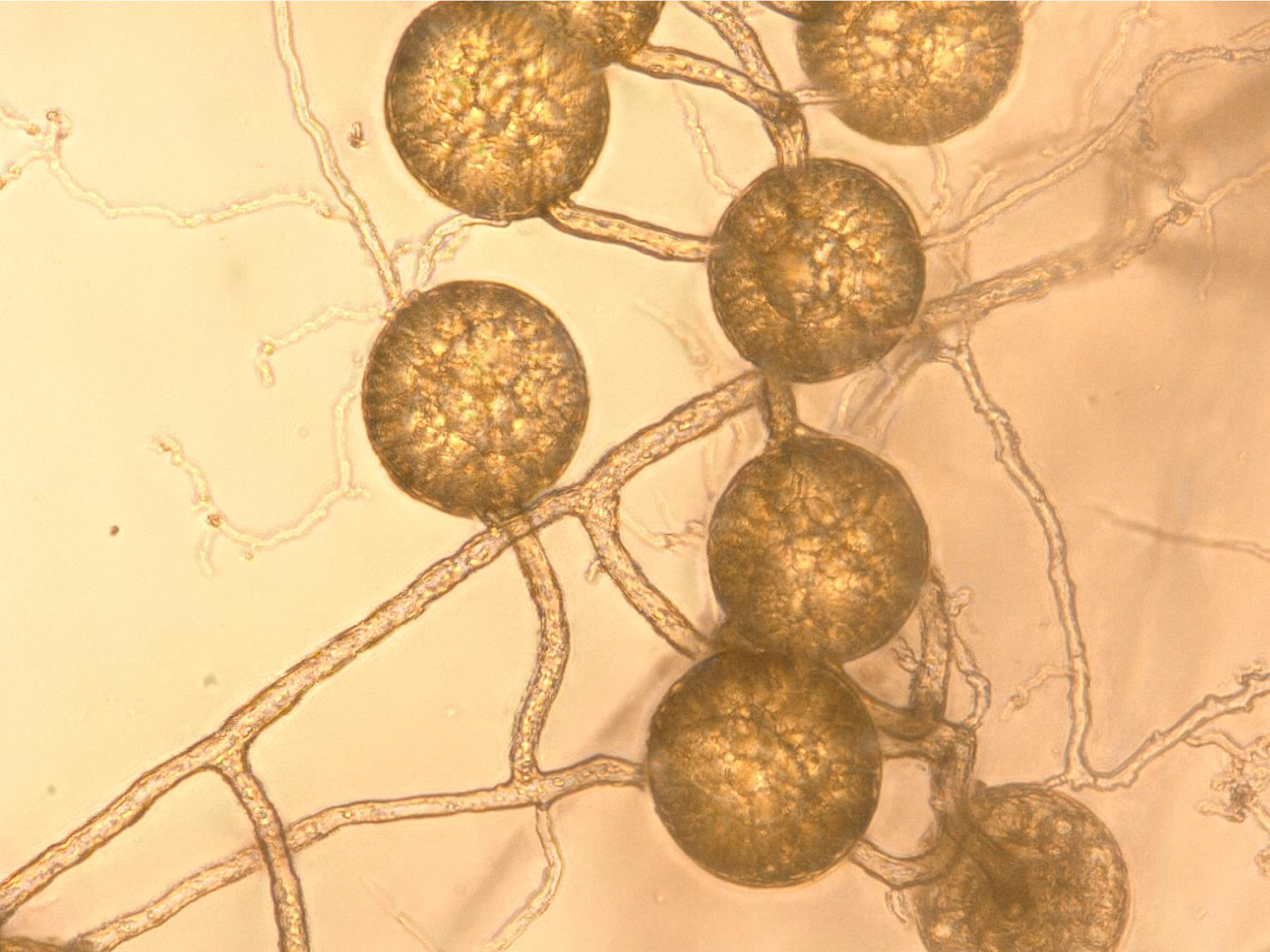 Introducing fungi to wheat boosted their uptake of key nutrients and could lead to new, ‘climate smart’ varieties of crops, according to a new study.

Researchers at the University of Leeds have demonstrated a partnership between wheat and soil fungi that could be utilised to develop new food crops and farming systems which are less reliant on fertilisers, reducing their contribution to the escalating climate crisis.

It is the first time the fungi, which form partnerships with plant roots, have been shown to provide significant amounts of phosphorous and nitrogen to a cereal crop. The fungi continued to provide nutrients under higher levels of carbon dioxide (CO2) predicted for 2100, which has important implications for future food security.

The results were published today in the journal Global Change Biology.

Lead researcher Professor Katie Field, from the University of Leeds’ School of Biology and Global Food and Environment Institute, said: “Fungi could be a valuable new tool to help ensure future food security in the face of the climate and ecological crises.

“These fungi are not a silver bullet for improving productivity of food crops, but they have the potential to help reduce our current overreliance on agricultural fertilisers.”

Agriculture is a major contributor to global carbon emissions, partly due to significant inputs such as fertilisers. Whilst meat production contributes far more to global warming than growing crops, reducing the use of fertilisers can help lower agriculture’s overall contribution to climate change. 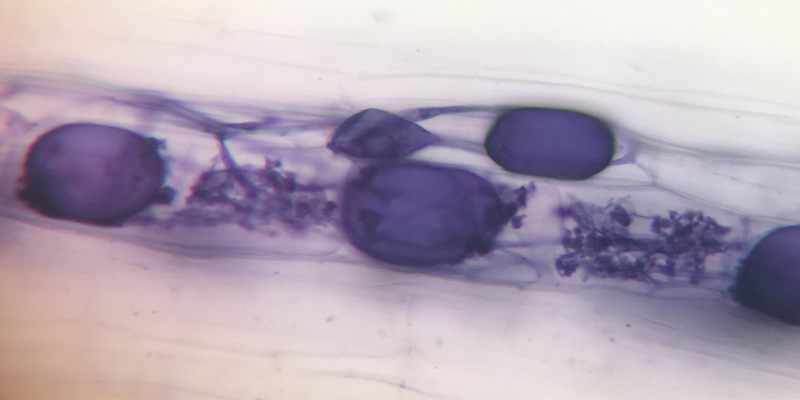 Most plants form partnerships with fungi in their root systems, known as arbuscular mycorrhizas, which enable them to draw nutrients from the soil more efficiently. In exchange, the plants provide carbohydrates to the fungi as a form of payment, known as a symbiosis.

Plants can give 10-20% of the carbon they draw from the air to their fungal partners, in exchange for up to 80% of their required phosphorous intake. These fungi can also help plants increase their growth, nitrogen levels, water uptake, and defend the plant against pests and disease.

But over the last 10,000 years, crop plants have been domesticated through intensive breeding, which has inadvertently stopped some varieties from having such close relationships with beneficial fungi.

Across the globe, wheat is a staple crop for billions, and wheat farming uses more land than any other food crop (218 million hectares in 2017). Despite increasing the application of nitrogen and phosphorous fertilisers to boost yields, the amount of wheat that can be produced from a given area has reached a plateau in recent years.

Whilst some varieties of the wheat grown by farmers form these partnerships with beneficial fungi, many do not. The Leeds researchers therefore suggest there is potential to develop new varieties of wheat that are less dependent on fertilisers. 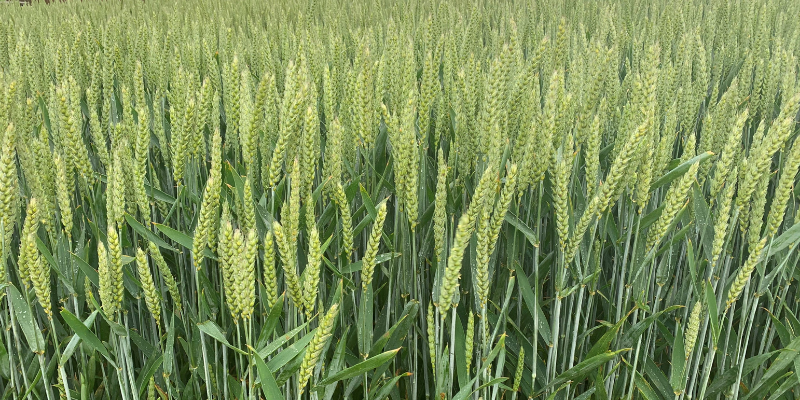 Co-author Dr Tom Thirkell, from the University of Leeds’ School of Biology, said: “For thousands of years, farmers have been breeding crops to increase productivity and disease resistance, but this has mainly been based on what can be seen above ground.

“We are starting to realise that some of the crops we have domesticated lack these important connections with fungi in the soil. Our results suggest there is real potential to breed new crop varieties which regain this lost relationship with beneficial fungi, and improve the sustainability of future food production systems.”

Scientists allowed the fungi to colonise the roots of three different varieties of wheat in the laboratory and grew them in one of two chambers - either mimicking current climatic conditions or those projected for 2100, when CO2 concentration in the atmosphere is predicted to be double that of today if emissions are not curbed. They wanted to know what benefits the different varieties could gain from their fungal partners and how the relationships would be affected by increasing atmospheric CO2.

By chemically tagging phosphorous and nitrogen in the soil and CO2 in the air, the researchers were able to demonstrate that the different varieties of wheat absorbed the nutrients through their fungal partners, in both climate scenarios.

As expected, the three varieties of wheat underwent different levels of exchange with the fungi, with some varieties gaining much more from the relationship than others for a similar carbohydrate ‘cost’.

In particular, the Skyfall variety of wheat took up far more phosphorous from the fungi compared to the other two varieties, acquiring 570 times more than the Avalon variety and 225 times more than Cadenza.

There was no difference in phosphorous or nitrogen exchange from the fungi to the wheat at the higher CO2 level for any of the three crop varieties. It therefore appears that the fungi can continue to transfer nutrients to the crop even under future climate conditions.

The researchers suggest it could be possible to breed new varieties of wheat which are more accommodating to a fungal partnership. This could allow farmers to use less fertilisers, as it may allow the wheat to get more of its required nutrients through the fungi.

There is ongoing discussion about whether fungi are a net positive or negative to the growth of cereal crops, as some evidence suggests fungi can act as parasites to their plant hosts.

It has previously been predicted that higher CO2 levels in the atmosphere will lead to fungi taking more carbon from their plant hosts, but this study found that not to be the case for these three varieties of wheat.

The researchers recommend that field-scale experiments are now needed to understand whether the fungi’s beneficial effects on wheat demonstrated in this study are replicated in a farm setting.

This study was funded by the Biotechnology and Biological Sciences Research Council.