Climate models are unreliable when it comes to predicting the damage that tropical cyclones will do to sensitive coral reefs, according to a new study published in the journal Earth’s Future.

With the expectation that tropical cyclones will increase in intensity with climate change, there has been interest among conservationists to use the models to identify the vulnerability of reef communities to storm damage, and to target conservation and protection efforts at those coral reefs that are less likely to be impacted by climate change.

But a team of researchers from the University of Leeds, the Australian Institute for Marine Science and the Commonwealth Scientific and Industrial Research Organisation (CISRO) is urging caution when using the climate models, arguing they are not yet reliable enough to determine which reefs will be most at risk from cyclone damage.

Cyclones are a moving weather system that create storm conditions including heavy rainfall, waves and powerful circular winds. The most damaging weather is found close to the eye of a cyclone, an area with a typical diameter of about 50 km.

Heavy waves can break apart the coral reefs - and the most destructive impact is seen with cyclones that are intense and move or track close to coral reef ecosystems.

Dr Marji Puotinen, a spatial and ecological data scientist at the Australian Institute of Marine Science and co-author of the paper, said: “It can take decades to centuries for coral communities to recover from the damage that is caused by extreme weather events - and it is important that conservationists target their limited resources at those reefs which are more likely to survive climate change.

“To do that, they need to assess the vulnerability of coral reefs in the face of more extreme weather patterns. But currently, we are urging caution when it comes to predicting the damage that could be done to a coral reef from future cyclones.”

To test the accuracy of the climate models, the research team looked at how well they simulated recent extreme weather events. They found the models failed to capture all the features of a cyclone that result in waves that can damage a coral reef.

Adele Dixon, a doctoral researcher at the University of Leeds’ School of Biology who led the study, said: “Our investigation has identified the pros and cons of using climate models in coral reef conservation work.

“The models are suggesting that cyclones in the future are highly likely to be more intense because of climate change. But they are less certain in projecting how those cyclones will affect individual coral reefs, which is the result of more localised conditions such as the pounding of waves.”

The researchers have published their study - Coral reef exposure to damaging tropical cyclone waves in a warming climate - in the scientific journal Earth’s Future.

The scientists call for further research to better understand the impacts of climate change on tropical cyclone characteristics that influence coral reef damage.

The top image - taken by Dr Marji Poutinen - shows Feather Reef which is in the central part of the Great Barrier Reef that is frequently exposed to damaging waves from cyclones, with a 10% chance of exposure in any given year under the current climate.

For more details, please contact David Lewis in the press office at the University of Leeds via d.lewis@leeds.ac.uk. 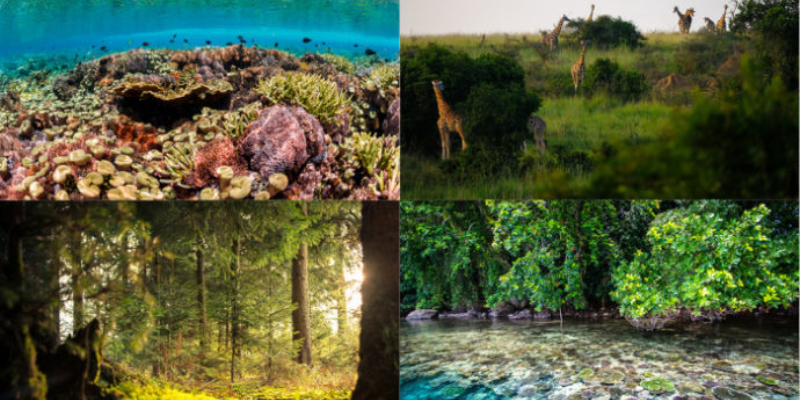