Targeting the biological host to get rid of unwanted guests 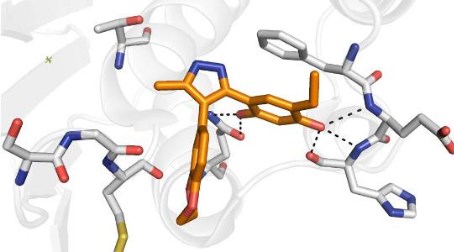 A new approach has been developed to combat diseases caused by herpesvirus infections, including everything from cold sores to cancer.

Researchers at the University of Leeds have discovered a way to prevent herpesviruses hijacking important pathways in cells which are required for the virus to replicate and cause disease.

Professor Adrian Whitehouse from the School of Molecular Biology and Astbury Centre for Structural Molecular Biology at the University of Leeds led the five year study, the results of which are published today in the journal Nature Microbiology.

Professor Whitehouse said: "We've spent several years demonstrating that a protein found in all herpesviruses, recruits a protein complex in the host cell, called human TREX, to help stabilise and transport herpesvirus RNAs out of a cell's nucleus so they are turned into viral proteins.

"Now we have identified a compound which can disrupt this essential virus-host cell interaction which in turn prevents herpesviruses replicating and producing infectious particles."

The approach the researchers used was unique as it targeted the enzyme activity of a key component of the cellular human TREX complex, known as UAP56.

Inhibiting this activity prevented the remodelling of the human TREX complex which stopped the interaction with the viral protein.

The project is a collaboration between virologists led by Professor Whitehouseand a team of chemists led by Dr Richard Foster from the University.

Dr Foster's team performed a virtual screen of thousands of compounds to identify potential inhibitors. These were then tested for their ability to stop herpesvirus replication without damaging the host cell.

Dr Sophie Schumann, lead author on the Nature Microbiology paper and a member of the research team added: "We initially targeted the human tumour virus known as Kaposi’s sarcoma-associated herpesvirus.

"However, further testing showed that the compound was also effective against a range of other herpesviruses which all use the same mechanism to replicate in their host cell, which is very encouraging."

Examples include Herpes simplex virus, which causes cold sores and genital lesions as well as human cytomegalovirus, which is associated with glandular fever and a range of conditions in immunocompromised patients and congenitally infected newborns.

Dr Foster said: "We still have a lot of work to do, but bringing together a target point and a compound is a significant finding. Now our job is to improve the quality and potency of the compound before it can operate as a future antiviral drug."

The research so far has been supported in parts by Worldwide Cancer Research, Wellcome Trust, and Biotechnology and Biosciences Research Council.

The next stage of Professor Whitehouse and Dr Foster's work, which is funded by a Cancer Research UK drug discovery award, will work towards improving the effectiveness and safety of the compound.

The image above shows a molecular level model of a normal human protein and the newly discovered inhibitor compound, and where on the protein the research team anticipate the two will bind together.

The full paper, Targeting the ATP-dependent formation of herpesvirus ribonucleoprotein particle assembly as an antiviral approach, is published in the journal Nature Microbiology.

Professor Whitehouse and Dr Schumann are available for interview, please contact Peter Le Riche in the University of Leeds press office on 0113 343 2049 or email p.leriche@leeds.ac.uk