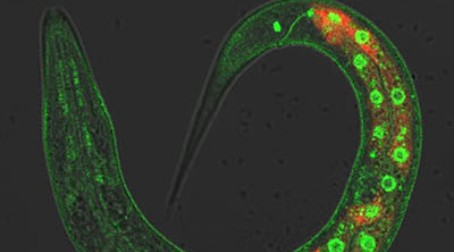 Scientists at the University of Leeds have now unraveled the nature of these signalling components.

It has been known for quite some while that the nervous system and gut can control human health and longevity. This is achieved by inter-tissue signalling mechanisms that activate protective responses, such as molecular chaperones and was first demonstrated a decade ago in the tiny worm C. elegans that is used as a model organism for ageing and many human diseases. Corresponding inter-tissue communication mechanisms have been observed in higher organisms as well.

What remained an enigma in this past decade is the nature of the signalling molecule that activates these protective molecular chaperones in tissues that are affected by age-associated disease such as Alzheimer’s Disease.

Mystery of the signalling molecule

Dr. Patricija van Oosten-Hawle’s lab, who is funded by the Wellcome Trust and NC3Rs at the Astbury Centre for Structural Molecular Biology, uses C. elegansdisease models to study human neurodegenerative disease. The research team have now identified individual components of an inter-tissue signalling pathway that activates the molecular chaperone Hsp90 in tissues affected by Alzheimer’s disease.  This can suppress the progression of age-associated protein aggregates, including amyloid beta oligomers that are toxic to cells and eventually cause cell death.

The key inter-tissue signalling component is a factor involved in the worm’s immune response, called PQM-1. The researchers could show that PQM-1, which has a counterpart in human cells, triggers specific immune components that “signal” other cells to “switch on” expression of the chaperone Hsp90. If these cells are affected by toxicity caused by the Alzheimer’s disease protein amyloid beta, Hsp90 can suppress this.

This is an exciting finding as it opens new possibilities to take advantage of the body’s own molecules to activate protective mechanisms in cells affected by age-associated deterioration. The next step will involve to understand the full signalling pathway in worms and investigate the corresponding immune signals in human cells. We are far away from an actual therapeutic application but this is a breakthrough step as it provides a novel avenue for drug development that activates the body’s own resources to overcome age-associated diseases.