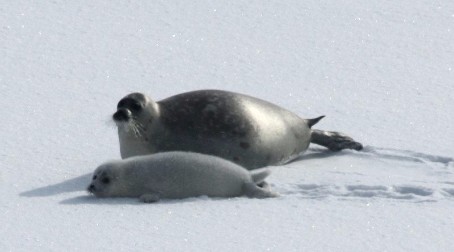 Research at Leeds investigates the impact of icebreakers on Caspian seal pup development.

Research has discovered that endangered seal pups might be getting separated from their mothers by icebreaker ships at a critical stage in their development.

Dr Simon Goodman (School of Biology) has been gathering data from observers who travelled on 39 icebreaker ships between 2006 and 2013 in the northern Caspian Sea, a major site for oil and gas drilling.

The Caspian seals found here are not found anywhere else, and it’s feared the icebreaker ships are disturbing their habitat by having to "take crosses through the area where seals are breeding," Dr Goodman says.

Caspian seal mothers give birth in late January on the open ice, on which they feed their pups for around five weeks. During this stage in their development, pups are incredibly vulnerable and depend entirely on their mothers for nutrition and protection.

On 184 occasions icebreakers were identified as having come within 10 metres of a mother and her pup. During this the mother would typically flee, attempting to take her pup with her, but there were instances of mother seals leaving pups behind, and one mother temporarily abandoned her newborn.

Due to the movement from the icebreakers it was not always possible to tell what happened, but in at least two cases the pup ended up far apart from its mother and these may have lost each other.

Dr Goodman has warned of the risk of pups being knocked into the water by icebreakers or their waves. Due to their underdeveloped coats not being heavy enough to withstand the cold, pups could get hypothermic. This could be "very costly in terms of energy, or in the worst case it can lead to the death of the pup," Dr Goodman says.

To combat the problem, Dr Goodman has suggested that fewer icebreaker ships should be sent through seal habitats during the breeding season. When transit cannot be helped, seal hotspots could be avoided, possibly using trained observers on ship who could offer advice on this.

Despite limitations on the flexibility of movement by ships, the Kazakh company that operates the icebreakers has responded well to this advice.

Caspian seals are not only threatened by icebreaker ships. The species is considered endangered mainly because they get caught in nets from illegal fishing operations.

"If you ask me what to do to protect Caspian seals, it would be to sort out the by-catch problem first and foremost," says Goodman.