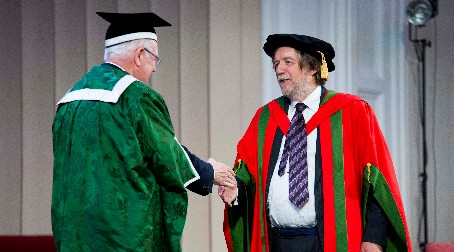 John Hardy is a Leeds graduate and a world-leading researcher in Alzheimer's disease.

John Hardy graduated from Leeds in 1976 with a BSc in Biochemistry. He undertook a PhD in neuroscience at the University of London and after post-doctoral research in Newcastle and Sweden, he returned to London where, in 1991, his team at St Mary's identified the first genetic mutations shown to cause Alzheimer's disease.

He formulated the amyloid hypothesis of the disease which is fundamental to most therapeutic strategies and developments in research in the field ever since. "We knew, when we identified the first disease-causing mutations, that our lives would be changed forever, and so it has proved," says Hardy.

Over 850 scientific papers have been published by John and his work has underpinned basic science and treatment research into Alzheimer's over the last 25 years.

In 2016 John was the first UK recipient of the highly prestigious Breakthrough Prize in Life Sciences - the so-called Oscars of Science, for his 'Pioneering research into the genetic causes of Alzheimer's disease, other forms of dementia and Parkinson's disease'.

In 2018, John is amongst three other dementia scientist to have shared this year's 1m Euro brain preize for pivotal work that has changed our understanding of Alzheimer's disease. He is goin gto donate around 5,000 euros of his share of the 1m euros from the Lundbeck Foundation to help campaigns to keep Britain in the EU.