The nautilus has nature's most efficient jets 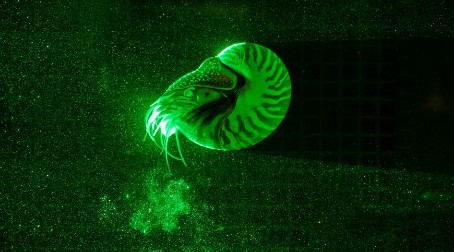 Dr Graham Askew and graduate student Thomas Neil went on a mission to understand better how this shellfish moves.

The study, conducted by Graham Askew from the School of Biomedical Sciences and graduate student Thomas Neil, has been published in the Royal Society Open Science which has uncovered the nautilus as being one of the oceans most energy efficient creatures of its kind.

Their study started off by sprinkling an aquarium with minuscule floating particles of aluminium oxide before putting in five chambered nautiluses into the tank to let them jet about. They used high-speed cameras, a laser that lit up the particles and software to record the particles movements. They found out that the nautilus sucked in the water and forced it out in the direction they were moving away from, just like a small jet.

Dr Askew and Thomas calculated the velocity of these creatures movements which showed that they are able to use 30 to 75 per cent of the energy it transferred to the water to move, this is much higher than other similar swimmers such as the squid who, according to Askew, tend to be about 40 to 50 per cent efficient.

A fish's tail or a diver's flipper moves very large volumes of water relatively slowly which wastes less energy than having to swiftly accelerate very small amounts. When sucking in water, the nautilus do so in a wide stream rather than in a more energetically costly narrow one.