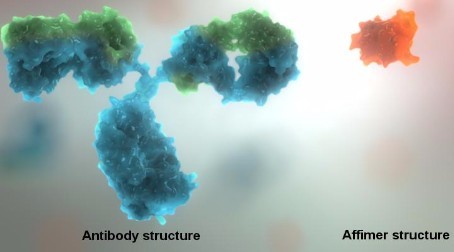 The diagnosis and treatment of a number of diseases, including cancer, has been revolutionised over the last 20 years through the use of highly specific monoclonal antibody-based products.

The market size for monoclonal-based therapeutics is estimated to be USD 108.01 billion in 2017 and is expected to generate revenue of around USD 218.97 billion by the end of 2023. However, despite the advances, antibodies still have some significant limitations for use as diagnostic and therapeutic tools, including their large size, the long timescale for development, together with the requirement for use of animals in their production.

Developing alternative binding molecules that overcome these limitations has the potential to deliver significant benefits for development of new and improved diagnostics, therapeutics and scientific reagents.

A new class of alternative binding proteins has been developed by a research team at Leeds led by Professor Michael McPherson, and Drs. Darren Tomlinson and Christian Tiede.

These small proteins (termed Adhirons in the original research literature, and Affimers® commercially and in post 2016 literature) contain a scaffold region based on cystatin/stefin-A consensus sequences and have short variable peptide sequence insertions that provide the specific binding function. These proteins can be rapidly produced, engineered for specificity, and are small, stable and do not require the use of animals in their production.

Avacta, is a UoL spin out company that originally developed instrumentation and veterinary diagnostics. Avacta acquired University of Leeds Affimer technology through deals with the University of Leeds including an exclusive licence to the UoL Adhiron patent. Avacta (AIM listed in 2006, current market cap value £20.86m (May 2018)) is now focusing its business development on the generation of Affimer®-based products as reagents, diagnostics and therapeutics.

In 2016, Avacta expanded its facilities in the UK in Wetherby (reagents and diagnostics) and Cambridge (therapeutics). Avacta has established a number of partnerships and collaborations with other companies. In-house development continues in the area of immuno-oncology, with the lead Affimer® currently going through pre-clinical testing, and expectation that this will enter first-in-man trials in 2020.

Avacta has a catalogue of nineteen Affimers® (May 2018) available to purchase for research purposes, and is also developing selected Affimers® for diagnostic/biosensor applications. The company employs highly skilled scientists, and has ambitious plans for future development