Visualising how molecules move in cells or interact with drugs will be possible with one of the world’s most advanced imaging centres being developed at the University.

Known as the Wolfson Imaging Facility, it will enable scientists to watch viruses attacking cells, immune cells getting ready to attack their targets and the cellular “railroads” used to transport molecules to their correct destinations.

It will be the first facility in the UK to give scientists a dynamic view of molecular interaction in real time.

This state-of-the-art imaging equipment will underpin innovative research in medicine and materials science.

The Wolfson Imaging Facility will bring together two research centres at the Leeds: the Astbury Centre for Structural Molecular Biology, which investigates the molecular basis of life; and the Bragg Centre for Materials Research which discovers, designs and creates new materials.

Professor Sheena Radford FRS, Director of the Astbury Centre, said: “Life is full of molecules in motion – they never stay still. And if we can discover how they move and where they go within cells, we can learn much more about how cells stay healthy and what happens when molecules misbehave that may result in disease.”

Professor Edmund Linfield, Director of the Bragg Centre, said: “It will put Leeds at the forefront of this field, attracting talented researchers to the University.

“It will also undoubtedly promote and enable collaboration between Leeds and other leading universities, in the UK and overseas.”

At the heart of the facility are two advanced technologies which will allow scientists to operate at a range of ultra-close-up scales, from the ability to visualise the structure of an individual molecule to molecules interacting with each other and moving around within a cell.

Atomic force microscopes have been in operation for years and they work at the sub-nanometre scale, allowing visualisation of matter less than one-billionth of a metre in size. At this scale, scientists can see the structure of a molecule by passing a probe over the sample which measures its shape and how that changes as molecules perform their functions.

Dr George Heath is a University Academic Fellow in the School of Physics and Astronomy working on the project. He said: “Currently, methods to study molecules in atomic detail typically involve a static snapshot – by freezing the sample or packing the molecules into crystals.

“But a new generation of high-speed atomic force microscopes can capture data very rapidly, almost every one millionth of a second. The collection of data is so fast, we can generate videos of molecules in action.”

Super-resolution fluorescence techniques can be used to see fine details down to the scale of 20 nm (a nanometre is one billionth of a metre).

Fluorescent dyes and lasers are used to highlight the target molecules. Previously, cells had to be frozen to allow sufficient time to use super-resolution techniques, but researchersat the Leeds are developing techniques that will allow sensitive cameras to image molecules in cells 100-times faster. This will make it possible to see molecular motion across an entire cell in real time. They also hope to track these molecular motions in a cell over protracted periods, perhaps even days.

Dr Aleks Ponjavic is a University Academic Fellow, also in the School of Physics and Astronomy. He said: “The atomic force microscope will give scientists a greater understanding of the structure and motion of a particular molecule. Under the light-sheet microscope, we will be able to observe how it behaves in a cell – and how it interacts with neighbouring molecules and structures, which are required for the cell to carry out its functions.

“Does it coalesce with other molecules, change shape, or move to a different part of the cell? These are important indicators of whether a cell is healthy or a disease process is starting – and that can give us insight into new potential ways of combating disease.”

The Wolfson Imaging Facility will foster even closer collaboration between bio-scientists, engineers and physical scientists to understand the changes at the very fundamental level of life, the cell.

Professor Radford added: “This is a very exciting news for UK science.

“We will make the facility available to all scientists with exciting questions to answer from across the UK and even further afield. In that way, new discoveries and expertise can be rapidly shared so that the entire community can benefit from this investment.”

The facility, which is expected to open next summer, will be housed in the new Bragg Centre for Materials Research.

The Wolfson Imaging Facility is a £3.5 million investment: with approximately £2.6 million from the University of Leeds and £750,000 from the Wolfson Foundation – an independent charity that supports and promotes excellence in the fields of science and health, heritage, humanities and the arts. A further donation has been made by a former student, Dr Chris Pointon.

Dr Pointon graduated with a degree in Chemistry and Earth Sciences in 1970.

He said: “Throughout my career I have believed there is great value in inter-disciplinary collaboration and breaking down boundaries between ‘specialisms’”.

“As a Leeds graduate and longstanding supporter of the University, I’m excited by the potential the facility has to produce ground-breaking outcomes by combining various scientific disciplines with medical research.”

Paul Ramsbottom, Chief Executive of the Wolfson Foundation, said: “We are delighted to continue our long partnership with the University of Leeds by supporting this state-of-the-art imaging equipment, which will underpin innovative research across a wide range of fields in medicine and materials science.

The image shows the membrane of a white blood cell and was produced using super-resolution microscopy. The facility at Leeds will produce similar images in real time.  Credit: University of Cambridge.

For further information, please contact David Lewis in the University's press office via d.lewis@leeds.ac.uk or 07710 013287. 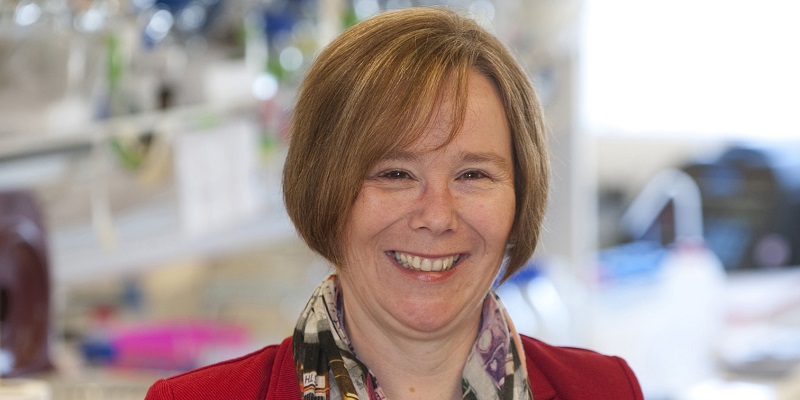