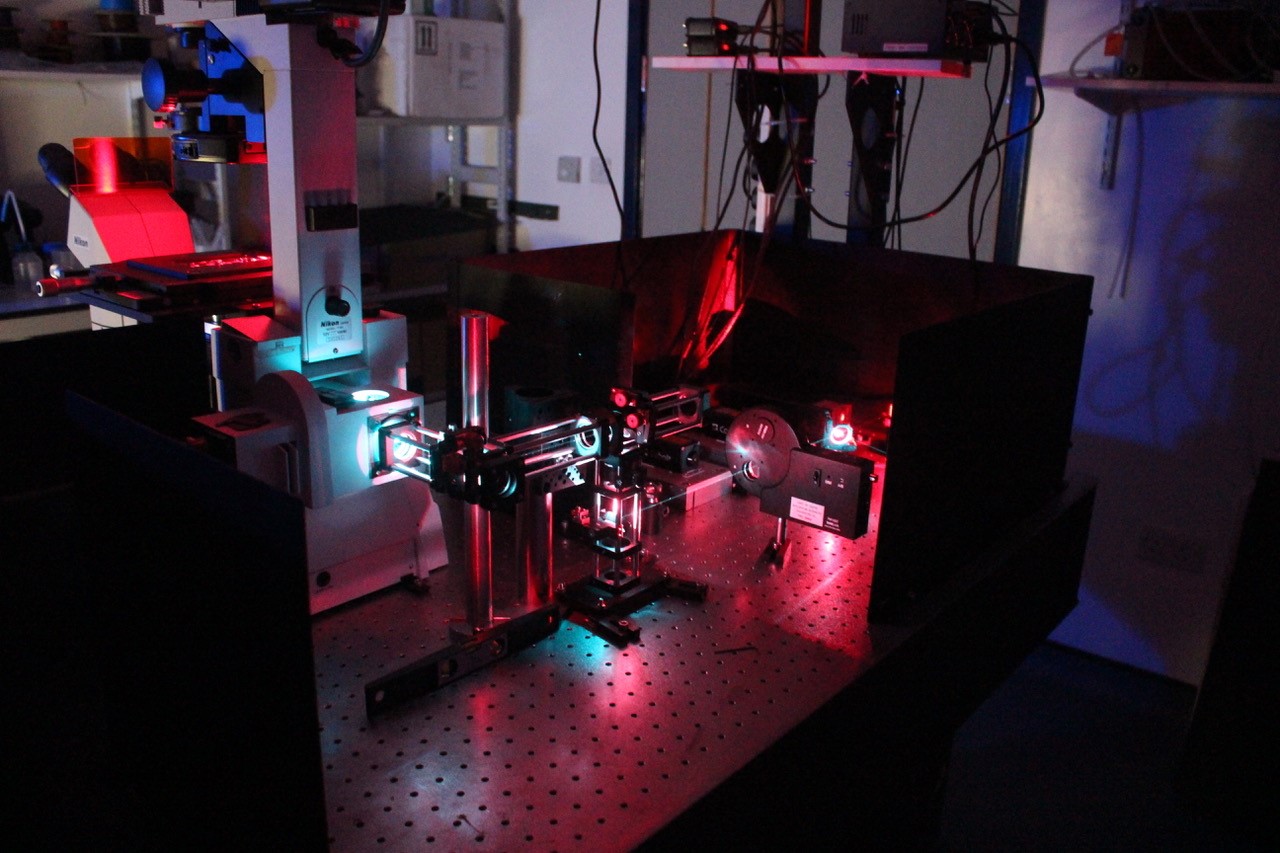 Fluorescence microscopy has been a vital tool in scientific research for looking at the locations of proteins.

Fluorescence microscopy has improved over the last 10 years to the point of being able to see individual proteins within functional clusters inside cells. 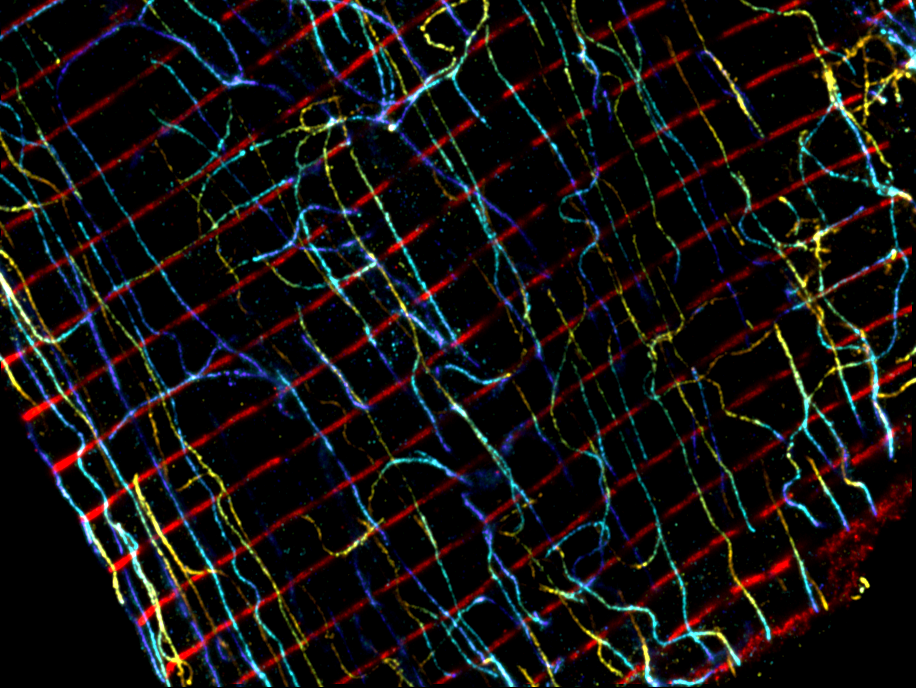 A cardiomyocyte, or heart cell, imaged with expansion microscopy. The image shows the repeating striated pattern of actinin (red), found at the z-discs of the myocyte, as well as the microtubules of the cytoskeleton (colour coded related to depth).

Typical light microscopy methods can only visualise structures that are approximately 1000 times finer than the width of a human hair. Many of the biochemical and physical processes that orchestrate life inside cells take place in spaces that are 10- to 100-times smaller than what light microscopes can clearly resolve. Over the last decade, various optical approaches have been put forward to overcome this ‘blindness’ of optical microscopes to the molecular systems governing life in the smallest scales. These include the Nobel Prize winning ‘super-resolution’ microscopy concept.

A unique chemical protocol called expansion microscopy (ExM) is the newest method of super-resolution imaging which allows the observation of ultrastructural details within cells. It uses the simple principle that if a structure is too small to visualise, physically inflating it (rather than optically magnifying it) will allow the finer details to be resolved. It achieves this by creating an imprint of the cellular structure on a three-dimensional hydrogel. Hydrogels are structures which can absorb water and physically grow, much like wetting a sponge. The chemical that ExM uses is the same as that used in diapers and nappies – sodium acrylate. 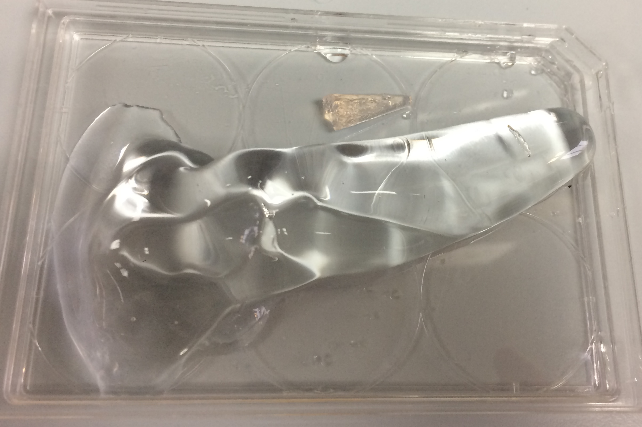 ExM involves a swellable hydrogel, using a chemical commonly found in diapers/nappies called sodium acrylate. A small amount of gel polymerised in a tube before (above), and after expansion in water (below).

Researchers in the cardiovascular group at the University of Leeds have used a refined version of ExM to reveal fine structural details of the cardiomyocytes, the cells of the heart. They were able to visualise the three-dimensional structure of the cellular skeleton, and the positions of proteins responsible for producing calcium signals, called ryanodine receptor (RyR) channels, which form the basis of the timing and forcefulness of the heartbeat. With the unprecedented level of visual detail that ExM has afforded them, they have observed the patterns in which the RyR proteins are individually ‘tuned’ by chemical modifications, within confined spaces of the cell.

This video shows a 3D volume of a cardiomyocyte, also known as a heart cell. Labelled are components of the cytoskeleton: the repeating units known as z-discs (red), as well as the microtubules (cyan).

In the recently-published research paper in ACS Nano, the authors – a consortium of investigators in the School of Biomedical Sciences and School of Physics – have applied this new method to study the cells of hearts suffering from right ventricular failure, a disease which is currently incurable. The authors found that the new tool provided them with a unique view of how proteins like RyRs are re-arranged in the cells of the failing hearts. They observe how the pattern of ‘tuning’ of the protein clusters is distinctly altered, in a way which explains why their calcium signals, and consequently heart function, is compromised. 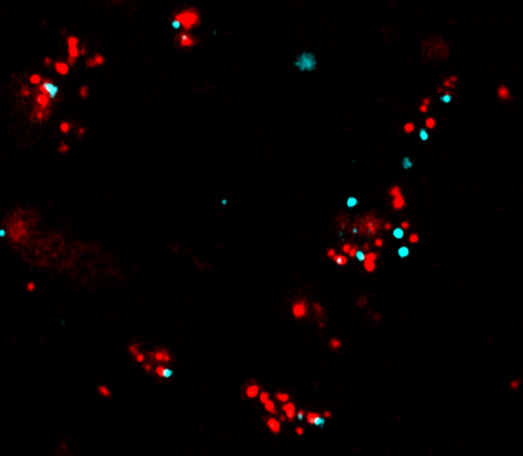 Ryanodine receptors (red) are responsible for producing the calcium signals which underlie the heartbeat. The proteins can be 'tuned' by chemical modifications such as phosphorylations (cyan), which change their function. The resolution provided by ExM allows individual proteins to be counted, and improved understanding of the patterns of remodelling to the clusters in heart faliure.

By visualising these signalling structures at an incredibly fine level of detail, it is possible to get a better understanding of the changes in a pathological scenario, and informs about how to target these processes to help tackle heart disease.

This work was supported by the Wellcome Trust and a partnership between the lead researchers, the MRC DiMeN doctoral training programme and Badrilla Ltd.

Access the recent publication by Sheard et. al. “Three-Dimensional and Chemical Mapping of Intracellular Signalling Nanodomains in Health and Disease with Enhanced Expansion Microscopy” at: https://pubs.acs.org/doi/10.1021/acsnano.8b08742